Cancer is Not the Endgame: Bowie and Nasopharyngeal Cancer

Bowie first discovered numerous small lumps on her neck in 2017. Thinking that she was feverish, she started to drink herbal tea, hoping that the tea would make the lumps go away.

The tea didn’t work, so Bowie consulted a doctor. She was advised to go for a biopsy, where tissues will be removed from her nose and checked for disease. As her CT scan results suggested that she might be suffering from nasopharyngeal cancer, Bowie was prepared for the worst.

To her surprise, the biopsy revealed that all was well.

A year later, Bowie’s neck began to swell again. She tried to shrug it off by convincing herself that this was another false alarm. However, when her neck swelled to the size of a ball, Bowie knew that she could not hide her head in the sand anymore. The time to face the music had come, so she went to the hospital for another CT scan and biopsy.

With the diagnosis of stage 3 nasopharyngeal cancer, the beautiful world that she had worked hard to create came tumbling down. 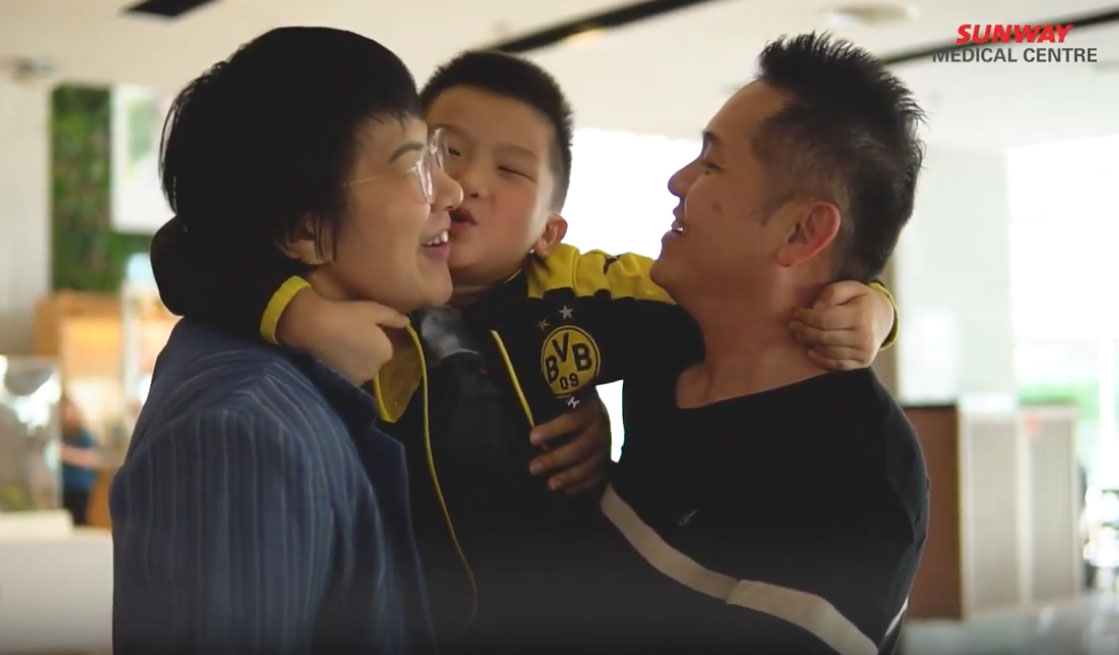 The photo captures a heart-warming moment between Bowie, Wilson and their second child.

Me. Me! Why me? Bowie thought, shocked and distraught. She had always considered herself to be a strong and healthy person - she rarely needed to take medicine to recover whenever she was bogged down with flu or fever.

How could it be me? Bowie was neither a smoker nor a drinker. She did not indulge in any other vices either. She felt penalised for her decency.

Surely it couldn’t be me... A happy-go-lucky person, she always thought that it was highly unlikely for her to be diagnosed with cancer. Like many, she was under the impression that there was a concrete correlation between cancer and negative emotions.

Bowie’s husband, Wilson, had a hard time accepting the diagnosis as well. He was at the verge of tears when he first received the news. However, when he saw how helpless his wife was, he realised that he needed to stay strong. Both of them had worked hard to build a lovely family together and Wilson would not let anything destroy their happiness. Not even cancer.

Determined to be Bowie’s pillar of strength, Wilson started to learn as much about cancer as possible. He brought his wife to Sunway Medical Centre to be treated by Dr John Low Seng Hooi. Those were the very first words that Bowie blurted out when she met Dr John Low in 2018. She was terrified of the huge tumour on the left side of her neck; she was in desperate need for assurance.

When Dr John Low smiled gently and shook his head, Bowie found all the strength she needed to conquer the battle.

Since her tumour was tremendously huge, it was not possible for Sunway Medical Centre’s medical team to give Bowie direct radiation therapy. As such, Dr John had proposed to shrink the tumour with chemotherapy first before proceeding with radiation therapy. The treatment caused Bowie’s mouth to fester. It also wounded her neck, making it unbearably painful for her when her children hugged her. Blood and pus started to ooze from her neck. Her mouth and neck had stiffened to a point where it was no longer possible to tell stories or sing to her children.

Bowie was in such great pain that she begged the doctor to give her morphine. By the fifth week of radiation therapy, her throat was hurting so badly that she couldn’t eat or chew anymore. She was admitted to Sunway Medical Centre.

The sight of his wife receiving nutrition via drips broke Wilson’s heart.

The Power of Love

Ah, if only there was a way to transfer the pain from one person to another! Wilson thought, saddened and frustrated. He was willing to bear the pain for his soulmate. Alas, that was not possible. So Wilson shaved his head bald to show his support to Bowie. Whenever Bowie felt like giving up, she would remember how Dr John had smiled and shaken his head when she asked, nervously, if she was going to die. She thought of her children looking at her eagerly, waiting for her songs and stories. I will recover, I will survive, and I will be singing songs and telling stories to my children again, she told herself as she exercised her mouth and throat muscles despite the excruciating pain to make sure that the treatment would not affect her pronunciation.

Bowie had successfully completed all her therapy sessions in March 2019. Reflecting on her experience, she was particularly grateful for the advancement of modern medical technology, without which she would not be able to share her story with us today. She wanted other cancer patients to know that they too can win the battle, and she hoped for all cancer patients to be blessed with the strength to fight until the end.

A Message from Dr John

Everyone thinks that cancer is a terminal disease. There are so many myths and stigma surrounding cancer, causing many patients not to receive the right treatment. By the time the tumour spreads, it would be too late.

This is a huge problem.

As doctors, we must encourage our patients and help them build confidence. We must give hope to our patients - and I don’t mean false hope.

I want everyone to know that cancer can be cured. Recovery is possible, so please seek medical treatment.