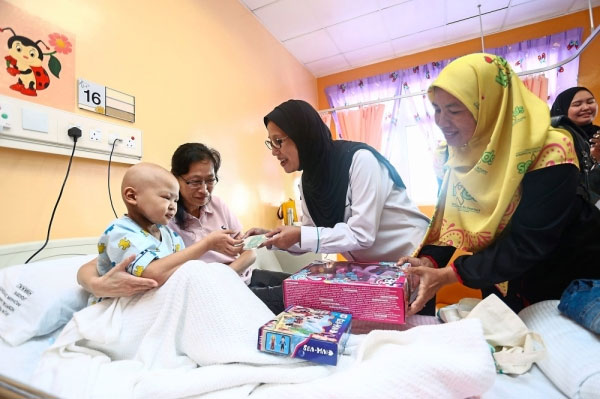 Though childhood cancers are rare, that does not mean that parents should not pay attention to the matter. In the United States, there are 15,600 new cases involving cancer among children and adolescents between the age of 0 and 19. Approximately 750 to 800 new cases are recorded each year in Malaysia.

A white colour in the centre circle of the eye (pupil) is one of the signs of eye cancer - also known as retinoblastoma. If such symptoms are prolonged, happened frequently and for no reason, parents should take their children to a doctor for examination.

Cancer in children can be divided into two groups: (i) cancer involving the blood system such as leukaemia and lymphoma, and (ii) solid tumours such as brain, kidney, liver, bone and muscle.

Blood cancer is the most common, with almost 30 per cent of children suffering from this disease. This is followed by brain cancer, accounting for almost 25 per cent of all childhood cancer cases.

Although genetics is a contributing factor to cancer risk, its risk is low and to date, the cause of cancer in children is still unknown, compared to cancer in adults which is often influenced by unhealthy lifestyles.

With technology, gynaecologists and obstetricians can detect tumour growth in the fetal organs. If there is a tumour at this stage, the medical specialists will monitor the pregnancy, birth process and follow-up treatment on the baby.

Don’t hesitate to see a doctor

Parents need to accept the diagnosis of childhood cancer so they can think rationally and trust the doctor to carry out the right treatment to give their children a chance to be healthy again. If they are satisfied with the doctor’s explanation, it is advisable to continue the treatment without any delay.

It is important to remember that cancer can spread at any time. Prompt treatment can help reduce risks and increase your chances of recovery. Although the treatment process will not be easy, the bottom line is this: Children have a high potential to recover from cancer.